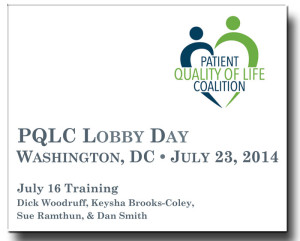 The Coalition invited representatives of a variety of non-profits and professional organizations to Capitol Hill to lobby for two pieces of legislation:

The legislation would focus federal money on marketing palliative care to the public, educating teams of professionals in palliative care, and dedicating NIH research to prove that palliative care is just as effective in keeping people alive as is traditional care.

In the week prior to Lobby Day, the PQLC held a training session online and by phone for the amateur lobbyists who would be traveling to Capitol Hill.

Here’s Dick Woodruff explaining what the Patient Quality of Life Coalition is, and who would be participating in the Lobby Day:

Dan Smith, former staff director to the Senate HELP committee, told the group that a key objective of the lobbying effort was to pick up cosponsors for the bill in order to move the bills into committee.

Smith emphasized the importance of cosponsors in the Senate in order to pass the bills by unanimous consent:

Shortly after PQLC’s lobby day,  HR 1339 (PCHETA) won 24 cosponsors, 5 of which are Republican, while its twin bill in the Senate (S.641) picked up 5 Democrat cosponsors but has yet to attract a Republican.

HR 1666 has picked up 20 Democrat and 3 Republican cosponsors since lobby day, and it now has a companion bill in the Senate.

During the training seminar, lobbyists were told that Sen. Begich (D-AK) was willing to sponsor a Senate version of HR 1666, but he needed help from palliative care advocates to find a cosponsor for his bill. As it turns out, last month Senator Begich did, in fact, introduce S. 2800, a bill identical to HR 1666, with Sen. Angus King (I-ME) as cosponsor.  The bill went to the Senate HELP Committee.

In answer to a question from the audience, Ramthun said that “the bills are focused on palliative care, however . . . they could end up folded into larger groups of bills. For example, the PCHETA bill [estimated to cost approximately $250 million to start] is Title VII and VIII, and so there are other physician, nurse education, allied health programs that do get reauthorized and that would be something that could be bundled into the other bills.”  Here is that audio:

There was also an interesting discussion on the fact that the Coalition doesn’t have “offsets” per se at present but they are willing to talk  — via the “fraud and abuse line in Medicare” for example.

For what it’s worth, the Center to Advance Palliative Care (CAPC) — a principal member of the PQLC — looks to Senator Wyden as a champion of their cause, and saw his promotion to chairman of the Finance Committee as a means of increasing their influence on Capitol Hill.  In a blog earlier this year, a CAPC representative noted Wyden’s help with PCHETA, and anticipated his introduction of S.1932, the “Better Care, Lower Cost Act” (one of the bills that I listed in a post several months ago).  From the CAPC blog:

Senator Ron Wyden, longtime palliative care supporter (and sponsor of the Palliative Care and Hospice Education and Training Act), introduced a Medicare reform bill this week along with Senator Johnny Isakson, that would create “Better Care Programs” for Medicare beneficiaries with multiple chronic conditions. . . . [As a] Washington Post article notes, Wyden’s work ‘often wins fervent praise from reformers—but rarely much political support.’ However, Wyden is positioned to take the Chair of the Senate Finance Committee, one of the most powerful chairs in Congress, so we may see increased political viability of his ideas in the future.

The following month, CAPC sent Wyden a little valentine on February 14 in the form of this blog post:

[C]ongratulations to Senator Ron Wyden, who on Thursday became the chair of the Senate Finance Committee. . . . Wyden is known for his big ideas and progressive policies, and his support for palliative care has been longstanding. We look forward to seeing how his leadership unfolds on this important Committee.