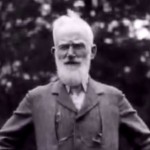 Bernard Shaw, euthanasia and death panel advocate:  “You must all know half a dozen people at least who are no use in this world, who are more trouble than they are worth. Just put them there and say Sir, or Madam, now will you be kind enough to justify your existence?”

How perfect.  Bernard Shaw as the spokesman for decision aids for terminally ill patients.

I’m sure the irony was lost on the author of “The Judges Have Spoken: Decision Aid Upgrade Design Challenge Winners Announced” as she opened her story with a quotation from Shaw.

The article announced the winners of a contest sponsored by California HealthCare Foundation (CHCF) to develop new tools to coach cancer patients and their families in treatment decisions.  Not surprisingly, the shared decision-making tool that won first prize from CHCF coaches the patient toward palliative care.

This particular tool is for cancer, where diagnosis is generally straightforward and prognosis is very often well-defined. Tools can be trickier, and perhaps more misleading, for patients with other conditions.

Decision aids are all the rage now.  As I reported two years ago, the masterminds at Center for American Progress and others involved in transforming our health care system are looking to “shared decision-making” tools to save money by cutting so-called unnecessary treatments, persuade patients and families to decline life-saving treatments, and at the same time to create the illusion that patients are making decisions for themselves.

So it is ironic that Jennifer David of Health 2.0, announcing the CHCF prize, quotes Bernard Shaw: “The single biggest problem in communication is the illusion that it has taken place.”

Bernard Shaw, beloved of the progressives, was a great believer in eugenics, and a member of the Voluntary Euthanasia Legalization Society.  No doubt he would have admired so-called decision aids, and other projects funded by the California HealthCare Foundation — projects designed to cut spending on so-called futile care, and to create the illusion that patients are in control.