In case you missed it, the Obama administration has issued a rule that will mandate a minimum wage for “direct care” workers (i.e., home health caregivers), extending the rule to all 50 states, including 29 states that currently do not have such regulations.

A map at the Department of Labor website indicates the states (in gray) that will be most affected by the rule. 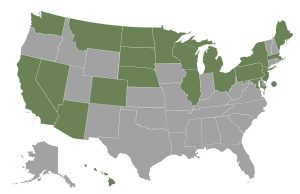 US Department of Labor map shows 29 states (in gray) do not extend a minimum wage to in-home care workers. [map from https://www.dol.gov/whd/homecare/statemap/ ]

The rule was announced in a Department of Labor press release on September 17, citing support for the measure from HHS Secretary Kathleen Sebelius.

From the press release:

Fulfilling a promise by President Obama to ensure that direct care workers receive a fair day’s pay for a fair day’s work, the U.S. Department of Labor announced a final rule today extending the Fair Labor Standards Act’s minimum wage and overtime protections to most of the nation’s workers who provide essential home care assistance to elderly people and people with illnesses, injuries or disabilities. This change will result in nearly two million direct care workers — such as home health aides, personal care aides and certified nursing assistants — receiving the same basic protections already provided to most U.S. workers.

More information on the home care ruling is available via a special page at the Department of Labor website. 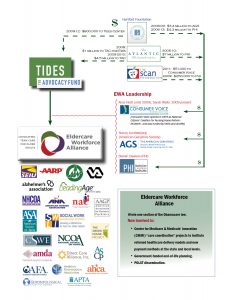 dercare Workforce Alliance launched in 2009 as a project of the Tides Center.

The move was hailed by the Eldercare Workforce Alliance (EWA), a project that originated via the Tides Center and went on to promote the now-defunct CLASS Act.

An EWA press release, issued on the same day as the Department of Labor announcement, stated that the coalition “applauds the Obama Administration for finalizing the Department of Labor regulation (RIN 1235-AA05) that narrows the companionship exemption to ensure most home care workers are no longer excluded from minimum wage and overtime protections.”